This is the second of three articles detailing our experiences with an early version of the High Isle Chapter. In case you missed it, do look at our general introduction to the Chapter and discussion of new Quality of Life features which will be part of Update 34.

Not to be confused with the Five Companions of the original ESO Main Quest, nor the legendary heroes of Skyrim who follow Ysgramor, last year’s Blackwood Chapter introduced the Companion system. In this system, you can acquire a Companion NPC to fight alongside you, building a relationship with them to increase their power. Each Companion NPC has a class similar to the player classes in Elder Scrolls Online, and can use up to five abilities (depending on Level), and one Ultimate. You can choose which abilities they have slotted, and can customize their mounts and costumes/outfits. As you progress with the Companion and improve their Rapport with you, they will offer you their personal quests to let you learn more of their story.

The first two Companions were the Imperial Dragonknight Bastian Hallix and the Dunmer Nightblade Mirri Elendis.

In the High Isle Chapter, two new companions join them – the Khajiit Sorcerer Ember, and the Breton Templar Isobel Valoise (pronounced the French way – approximately Val-wa). Much as I’d like to go into their stories – which are excellent – I shall avoid spoilers.

A talented mage and former street kid, Ember is a chaotic, earnest, notorious troublemaker. In short, she’s a certified disaster. Call this companion to your side for a bit of chaos and help her fuel her endless curiosity for mystic knowledge.

She is essentially a Sorcerer, though to avoid whatever game oddities would occur if Companions were able to themselves summon pets, she does not have access to the Daedric Summoning line. Instead, she has abilities that are similar to the player Dark Magic and Storm Calling lines, along with a few totally new skills.

Her quest starts at Tor Draioch, a mage’s tower near Gonfalon Bay.

Please note that in these summaries I am not including any values, because these are subject to change with balancing over the PTS cycle.

Ultimate – Raging Storm – unlocked at Lightning Caller Rank 20. A thunderstorm follows her enemy, striking all enemies within an 8 meter radius 8 times over 8 seconds. The final strike deals 300% extra damage to enemies under 25% Health.

Hail Blast – Similar to Crystal Shard, except that it hurls a shard of hail at the target dealing Frost Damage (instead of Magic Damage).

Shocking Burst – unlocked at Lightning Caller Rank 2. Similar to Lightning Splash, it creates a nexus of storm energy at an enemy, dealing instant Shock Damage to all enemies in the area and additional Shock Damage over 8 seconds.

Thunderous Strike – unlocked at Lightning Caller Rank 11. Similar to Mages’ Fury, this is an Execute which deals a massive amount of Shock Damage to one enemy and further Shock Damage to nearby enemies. Used when the enemy is below 25% Health.

Entomb – Similar to Encase, it immobilizes enemies for 4 seconds and heals Ember over 8 seconds.

Quick Fix – A single, burst heal. Used when Ember or an ally is below 75% Health.

Shared Wards – unlocked at Playful Schemer Rank 8. Similar to Ward Ally, it absorbs damage for 6 seconds and heals over 8 seconds.

Second Wind – unlocked at Playful Schemer Rank 17. Ember uses their backup resources, reducing the cooldown of all their other abilities by 5 seconds. This ability sounds almost too good to be true, what with Companions’ cooldown being the most irritating thing about them, but there is no indication of how long it lasts.

Cunning – Increases Critical Chance by 3% and damage done by 3%.

Ember is obviously intended to be the “morally flexible” Companion that we’ve been asking for. Her special ability, Ember’s Keen Eye is “When pickpocketing, bestows a chance to acquire hidden wallets your mark hoped to keep secure. Hidden wallets may contain additional gold.”

She is an extremely powerful Damage Dealer at high level. I set up the Level 20 Ember template with a Lightning Staff and gave her Thunderous Strike, Entomb, Quick Fix, a couple of Destruction Staff abilities and the Raging Storm Ultimate. She really did hold her own against Volcanic Vent bosses. I feel that she will be excellent for players whose DPS is lacking. She could probably also be a Healer, but not a Tank.

Brave, forthright, and just a little dorky, Isobel Veloise is a knight errant sworn in your service. Call this companion to your side and lead her forth in search of glorious tales, wrongs to right, and delicious candy sweets.

She is a Templar who comes equipped with a sword and shield. Her abilities are a mix of all three of the player Templar lines.

Her quest starts at Castle Navire, in the southwest corner of High Isle. Like all knights, she has a friend in need of rescue…

Ultimate – Baneslayer – unlocked at Blazing Might Rank 20. Isobel Veloise channels her energy and conjures a weapon made of sunlight before striking downwards, dealing Magic Damage to all enemies in front of them. Enemies damaged by Baneslayer have particles remaining on them for 10 seconds that detonate for Magic Damage when a player deals damage to them.

Penetrating Strikes – similar to Puncturing Strikes. Attacks 4 times, does Magic Damage, and afterwards Isobel and neighbouring allies have the damage of their next Light or Heavy Attack by 50%.

Sun Brand – unlocked at Blazing Might Rank 2. Similar to Sun Fire, it blasts an enemy with Flame Damage and causes additional Flame Damage over the next 8 seconds.

Divine Destruction – unlocked at Blazing Might Rank 11. This is the Companion version of Radiant Destruction, a channelled Execute used when the enemy is below 25% Health.

Solar Ward – Like Sun Shield, this reduces incoming damage and creates a shield which lasts for 6 seconds.

Gallant Blitz – unlocked at Brilliant Shield Rank 5. A bit like Focused Charge, but it doesn’t do any damage – simply setting all enemies in the area Off Balance for 7 seconds.

Spear of Light – unlocked at Brilliant Shield Rank 14. Similar to Piercing Javelin but Isobel hurls a barrage of spears at all targets in front of her, dealing Magic Damage and knocking them down for 4 seconds. This attack ignores the enemy’s Resistances.

Blessed Sacrament – It’s Rushed Ceremony but with an additional small Heal over Time. Used when Isobel or an ally is below 75% Health.

Holy Ground – unlocked at Healing Shield Rank 8. This is an AoE heal. Isobel consecrates the ground under her for 8 seconds, healing herself and nearby allies every 2 seconds and snaring enemies by 50%. Used when Isobel or an ally is below 75% Health, or there is an enemy nearby.

Enchanted – Decreases ability cooldowns by 3% and damage taken by 3%.

Isobel’s description suggests that she is another Lawful Good character like Bastian. Her special ability is Isobel’s Grace which “Bestows a chance, after defeating a World Boss, to recover the pack of a slain knight. Packs may contain additional loot.”

Like player Templars, she could do any role: Damage, Healing, or Tank. I only played through her initial quest (which is fantastic!), so I’m not sure how she would be best utilised. I’d be curious to try her as a Tank using her shield, self-healing, and One Hand and Shield line skills.

The Elder Scrolls Online: High Isle arrives on PC/Mac and Stadia on June 6, and on Xbox One, Xbox Series X|S, PlayStation 4, and PlayStation 5 on June 21.

On Monday, we’ll be publishing an article about the new card game included in the High Isle Chapter, Tales of Tribute. Look out for it then. 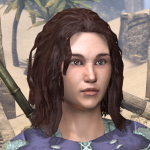 A Review of ESO’s Customer Service